Lido to prepare for the bear market

there is no full time economics person on this project, autists only, and yes i am pointing out things the autists did bad and the list is increasing all of which are valued in the millions and billions of usd

so yeah sometimes shining a light where literally no one else wants to shine it creates change. it feels a lot like the uniswap treasury and how its been raided by mercenaries and people that really do not have the best interests of crypto but instead are just passers by looking to dump tokens every chance they get

so yeah, my recommendation is a FULL TIME economics professional that has been in crypto since at least 2013 … also we should have a regularly updated list of the people that work for LDO and what they are doing there … 50 people sounds like a ridiculous number again without really concern for economics of the project

notably, the team and mercenaries ,even w this shit price of ldo, are still up 100x lol

so id say most of the economics problems comes from that, in their mind, they all have 8 figures usd of LDO so they dont care about the economics of hte project as much so we have stupid posts like “Lido to prepare for the bear market”

here we have @Hasu advisor to LDO accusing coinbase, who is an investor of LDO (via coinbase ventures) of fraud lol 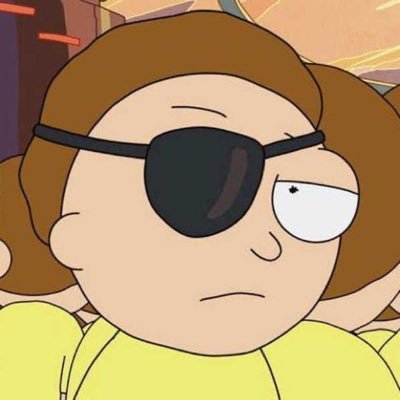 @hasufl
This gaslighting from@coinbase is *incredibly* rich. Coinbase is estimated to control at least 15% of all validators right now - but it could be more since they refuse to be transparent about it. And unlike Lido, their stake is not distributed over 21 independent operators. https://t.co/RXXUWGCgZH 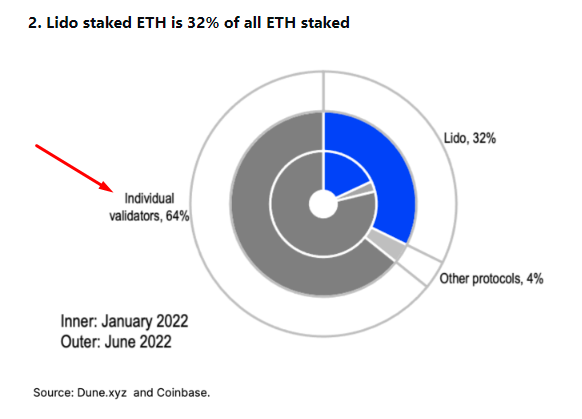 so a ldo investor is committing fraud against ldo, cool.

The quote concerns the scenario of “Lido gets veBAL spending 20% of staking fees” — the “op costs” there is that spend, not what Lido spends on team, marketing and other ops.

Let’s do a short back-of-the-envelope analysis.

The market has seen the 4-year bear already, and the drop wasn’t 2x or 5x — it was ~15x. Selling 10,000 ETH would allow to secure ~1.5 years of runway while having the chance to accumulate rewards in a meantime. Would took less ETH have we done it earlier for sure, but we’re making next moves from the situation we’re currently in.

There are 3 basic strategies for making a budget, so call “could”, “should”, “must”.

“Could”: In the booming phase, we need to do what we can to rapidly seize the market, make ourselves stand at the advantage position and lead the trends.

“Should”: In the stable phase, we need to make sure the entity can be run stably. Take as much as, or a bit less than we can earn to pay the costs on a fairness standard.

“Must”: In the decline phase, we need to make sure to survive. That is, we drop all unnecessary costs and focus on the most important things.

IMO, we are now in the position between the “should” and “must”. The liquid staking market still has space for expansion. But, based on the current crypto market, or financial market more broadly, it is in a decline phase.

If so, we need to have a more clear and specific list on the budget, before we make a decision on whether or not we need to sell 10K $ETH.

BTW, as @kethfinex has noted in this post, we are “on a potential tokenomic and governance changes in the coming days”. it’s better to keep the topic in discussion till the changes are done, if it’s not so in a hurry.

It's the tokenomics, stupid!

Appreciate your thoughts here. Some ideas are being shared on a potential tokenomic and governance changes in the coming days so looking forward to getting your feedback there.

Please change your tone and bit and stick to what’s actually being discussed and proposed in this thread. As said above you’re calling out things that no one on this forum is responsible for and complaining about Wormhole, Arthur and Coinbase doesn’t really contribute to what’s being discussed.

A question about team salaries. Are all the employees in the team paid in stables?
As we can see the token economics, there are 15% tokens to “Founders and future employees”. How many tokens are distributed to the so-called future employees now? (bonus or salary)

We’re working on more precise estimate (read: “no number at hand rn”), but should say that 1) the team is sizable as-is and we expect it to grow; 2) significant portion of comp is in stables — you can look through the last proposals hiring for DAO, for instance.

hey @kadmil, great napkin math, this is really important and helpful for us to think through. I do agree that securing a 18 - 24month runway is critical, though it doesn’t have to be all in one day. In reviewing the Lido Treasury, I could be wrong but it doesn’t look like anyone has been getting paid yet on payroll from the treasury, so my assumption is the off-chain funding is still funding that - but the concern here is that it is running low and soon we will have to switch over to the Lido Treasury for funding all operational expenses.
There’s a few considerations when thinking about your runway (which you have already begun to articulate), one of which is ‘can the cashflow from the protocol cover our expenses and be cash flow neutral or positive’. Since the revenues are in ETH and liabilities in stable coins - even though the protocol / DAO may be cash flow positive when ETH is above $1,800 - you have pointed out the risks and exposures from this asset - liability mismatch.

First - the DAO / team should establish some basic policies for working capital. As an example, at WeWork (where I was the global treasury manager for 6 years previous to web3) we would hold at least 90 days of expected expenses (not including revenues) and Capex on hand at all times (denominated in the various currencies our liabilities were denominated in). We would then hold at least another 180days projected cash burn in ‘safe investments’, denominated in USD (so some currency risk), to earn yield on those, and then every month or when necessary pull funds from the yielding strategies to working capital. Something like this is a good starting point for Lido - ie selling at least 9months worth of ETH (5 - 6k ETH) into stables TODAY, and deploying half or 65% of it into what the DAO is comfortable as conservative stablecoin yields (which should be proposed into a whitelist of allowable investments and part of the official policies).

Additionally there may be an opportunity to utilize cash flows to negate the need to immediately sell the entire 2 years runway, but it will not be an overnight setup and may involve an expert(s).
In a typical treasury world - we would use forward contracts with set expiration dates, typically a laddered & rolling 90 day strategy would work (can detail that for those interested) selling ETH forward every 90 days for USDC. One option would be to contact someone like GSR about this at a big desk. Perpetuals don’t really work the same without a set expiration date that matches an expected cash flow - because we would want to physically settle these forward contracts reducing our exposure, not adding additional leveraged exposure. This is an awesome opportunity because as you mention, the ETH is locked up! So unlike most companies / protocols we can establish projected earnings very confidently, which is a huge advantage (most corps will only hedge like 50 - 60% of expected revenues because of how unpredictable the fp&a projections often are, but Lido is very unique, could likely hedge out even up to 90%) That may take time to setup though - but again could be investigated by the team (or likely Karpatkey has an intro there, and having worked with them a bit would feel confident in their ability to help manage a forwards program).

I’d be happy to help / advise (no compensation) the team out with some of these policies, and on possibilities of setting up a forwards hedging program.

are you offended that i shine a light on a long list of economic screw ups that no one else shines a light on?

mind you i saved this project from absording 650,000 LDO tokens in one year from now, simply by pointing out an economic screw up.

if they did care, it is hard to imagine how they are so bad at managing economics unless they are incompetent which they are obviously not.

“Show me the incentive and I will show you the outcome”

This is a mission critical project to the outcome of crypto against the global financial system. I find it to be wanton disregard for such a project to raise $70 million and keep it in the most speculative assets without securing a multi year run way.

So yes, I have millions of USD in LDO tokens on the line. I think its reasonable to point out these flaws when no one else is and know who is responsible for such a screw up so that this stops happening.

I’m making a review of the historical DAO treasury management. A receivers list has been made and I will do some research in the following days. 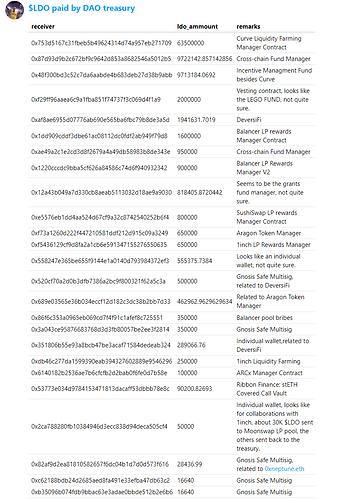 It's the tokenomics, stupid!

Warning: There will be some critical words in this post. If some of them make you feel insulted or maligned, please press the ‘×’ button asap. The word ‘stupid’ includes all $LDO holders till now, including me. After leaving the forum for about one year, I came back to find out whether there are some changes happening, or may I do something for the so-called ‘community’. Merely nothing changed, still merely nothing I can do. Yes, Easy Track was established. Who is voting other than the team…

Let’s take the steps after more clearly on where we are standing.

Sorry for me asking, where this “saved 650,000 LDOs” comes from? Not to argue, genuinely curious.

Just in case, most of the addresses can be checked against Deployed Contracts | Lido Docs list & forum posts on LEGO & Referral committees — addresses of committee multisigs are there

Thanks, having checked out the 2021 October run address which should not be included.

Should be made complete and compiled in an analytical report pretty soon.

I believe @McNut has been working on trying to get an accounting of spend so maybe you can double check also with him.

Lido on Solana - Proposed Transition from Chorus One to P2P Proposals

it was originally 1 year

i am the only one that pointed out this is too short, and asked for 4 years, but they updated it to 2 years for long term alignment lol