Proposal to fund the Protocol Guild Pilot via a Lido Grant

Proposal to fund the Protocol Guild Pilot via a Lido Grant

This is a signaling proposal for a grant which will direct funding to the Protocol Guild, a vested split contract composed of Ethereum core protocol contributors.

Here’s a longer exploration of the project rationale.

If we believe what we are building is important, then we should structure the incentives to attract more smart people to work on it. After all - “Ethereum is an unprecedented arena for playing cooperative games”; we should try to manifest the novel possibilities made possible by this arena. (Griffith, 2019)

What is the Protocol Guild?

The Protocol Guild aims to address the challenges mentioned above with an autonomous value routing mechanism: a weighted split contract that includes vesting (0xSplits). Members will solicit sponsorships in the form of tokens from applications & protocols that build on Ethereum, which gives core contributors the possibility of upside exposure:

To date, the membership includes over 100 Ethereum core protocol contributors, including researchers, client maintainers, upgrade coordinators, and more, all self-curated (member list here). This is a broad-based ecosystem effort, not managed by the EF. Members come from 21 different teams and 9 organizations; only 30% of members are directly employed by the EF.

The Guild will act as an autonomous value routing mechanism, operated independently from any existing institution, purpose-built for incentivizing long-term core protocol work.

We’ve spent the last 5 months refining the mechanism, onboarding members, and articulating how the smart contracts should be constructed. At this point, we’re ready to test the mechanism’s efficacy with a 1 year / $10mm Pilot. These are intentionally modest parameters to make sure the mechanism operates smoothly before graduating to a full-scale fundraising round. The funds for the Pilot would be vested to Guild members over a one year period.

We are currently outreaching to prominent DeFi protocols / L2s to get commitments for this important first milestone. If this pilot is successful, the Guild will proceed with a second round of outreach for a larger amount of funds, vested over several years.

We are inviting Lido to be part of this inaugural Pilot in the form of a 2,000,000 LDO transfer to the Protocol Guild’s vested split smart contract. This will directly fund incentives to work on Ethereum base protocol development.

Protocol developers should be exposed to the protocols’ upside and thus we propose the funding to be in the form of LDO instead of stETH.

Motivations for Lido to support the Protocol Guild

A snapshot vote to commit to transfer 2,000,000 LDO from Lido treasury to the Protocol Guild vesting contract, which will be deployed in the next few weeks.

Once committed, an omnibus onchain vote to transfer the funds.

That post is a concrete continuation of our long-term internal discussion about giving back to the protocols we stay on the shoulders of, and larger and longer-term external discussion about Ethereum ecosystem funding Ethereum. Lido is closer to the heart of the protocol than most protocols (about as close as MEV builders) and is naturally positioned to participate in this initiative.

What’s most valuable for Lido here is that all the hard work about evaluating contributions and funding levels had already been done by an outside, independent party.

Lido and Ethereum core developers and researchers have the same goal: to keep Ethereum PoS consensus as open and decentralized as possible. Without a healthy Ethereum, Lido cannot succeed in its mission. Hence, it is very clear to me that Lido should be the trailblazer in making Ethereum development more sustainable and creating a precedent that others can follow.

We are in a very fortunate position that others have done the hard work to create the Protocol Guild, thoughtfully addressing the difficult problems inherent to public goods funding. Some iteration will be required to find exactly the right formula for this mechanism, how to distribute funds, manage membership, etc. so I like the approach of starting from a 1-year pilot program and then scaling it up from there.

I would love to see Lido support this proposal.

I did almost nothing re:Protocol guild, just helped to polish this proposal

I am incredibly supportive of this proposal. Lido runs an enormous share of all eth2 validators and has always sought to be a good actor in each ecosystem of which it is part. Funding client teams is aligned with Lido’s interests and mission, and there’s probably no opportunity for a better ROI. Large treasuries typically struggle deploying capital to the right initiatives, but this seems like a total no-brainer.

Strongly in favor, core devs must have upside to the projects of the ETH ecosystem.

I think that’s a great proposal for Lido to carry on!

Appreciate the support, all

A snapshot vote to commit to transfer 2,000,000 LDO from Lido treasury to the Protocol Guild vesting contract, which will be deployed in the next few weeks.

We are planning a transfer. Please share the details. We need a signed message with the address where transfer should go.

! Thanks a ton to the Lido community for this commitment.

We are still setting up our vesting contract, to which the funds should be sent. I’ll make sure to post the address here, and confirm across a few more channels, once it’s set up. ETA is a few weeks.

Sincere appreciation for the Lido community being the first contributors to PG! As Tim mentioned, we’ll circle back with the vesting contract address once it’s deployed.

Edit May 8 2022: the LDO tokens can be sent to the recently deployed Vesting Contract. Note that it’s a two-step process: deposit assets and then start the stream.

Sorry for the long silence on the matter. We’re running some test to ensure safe funds allocation & preparing the transfer to go to the nearest Aragon vote.

In the meantime we wanted to notice that in the chosen design the funds, once sent from the Lido Treasury, would ultimately be controlled by the 6/10 Protocol Guild multisig (3. Smart Contract Architecture — protocol-guild documentation) managing the list of addresses to receive rewards & their respective shares. Current list & shares, as noted above, can be checked out in “beneficiary contract” UI: Trustless, composable, gas-efficient splits

one small clarification for anyone not familiar with the setup is that in standard operation the Multisig doesn’t have custody of the funds at any point - all it can do is update the split membership and weights. the vesting contracts operate trustlessly. If all the signers were to be compromised, then they could redirect any shares that vest in the future, but not any that have already been vested.

Here’s a diagram from the docs which helps to illustrate the relationship between the vesting contract, the split contract, and the multisig: 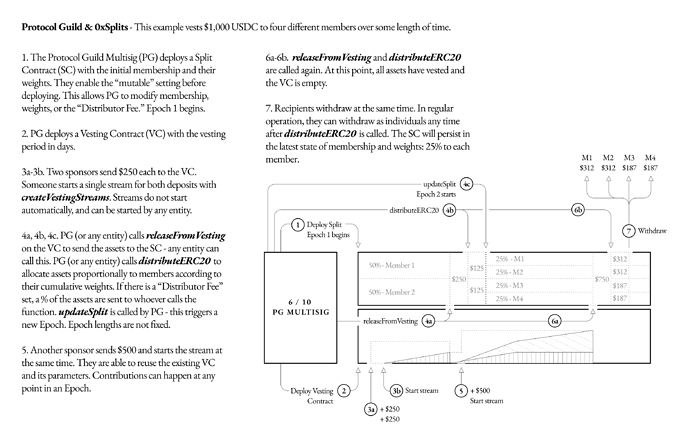 The on-chain voting successfully completed and was enacted

It’s been about 6 months since your generous grant to the Protocol Guild’s 1-year pilot, so I wanted to pop by to provide you all with an update for how things are going, as well as what we’re currently working on.

As a reminder, the Protocol Guild is a novel funding mechanism for Ethereum’s core protocol development, which aims to facilitate and normalize the community and ecosystem sustainably funding the infrastructure it depends on, long into the future. The Guild’s innovation is that it self-curates a list of active core protocol contributors, who own a share of donated funds based on a time weighting, vested over time. Your community donated 2m LDO tokens in May, worth about $2.8m at the time. That figure actually still represents the largest individual donation the Guild has received, so a HUGE thank you for that!

Here are some high-level updates:

If you’d like to read more, you can check out the below links. Otherwise we’re also here in case you have any follow-up questions! Thanks again for being a trailblazer in this public goods funding experiment, and wishing you all happy holidays!

Thank you for the update! Happy that through the initiative Lido DAO had been able to support all the work Guild is doing.