Improving the incentive structure for the Lido on Polygon team

We propose to increase by 500,000 the number of incentives for the Shard Labs team who make Lido on Polygon to 1,500,000 LDO total to reflect that Polygon importance had risen relatively since the inception and that the deal was different from our baseline for other networks as well.

Polygon is important for Lido cause it is a growing network with much DeFi activity and strong business development.

The Shard Labs team is doing a decent job of making Lido on Polygon alive. They successfully passed their timelines and achieved the 1.61% of market share promised in their proposition steps. They have an excellent team of professionals in the technical sense and business and marketing and can reach the next expansion and grow faster.

The current incentive structure for Lido on Polygon was unsuccessfully drawn up and does not meet the current needs of the team.

Hence, we advocate for the increase with the following changes:

Our proposed new compensation structure for the Shard Labs team compared to other Lido on X teams,

The new structure is roughly aligned with other current Lido on X deals. 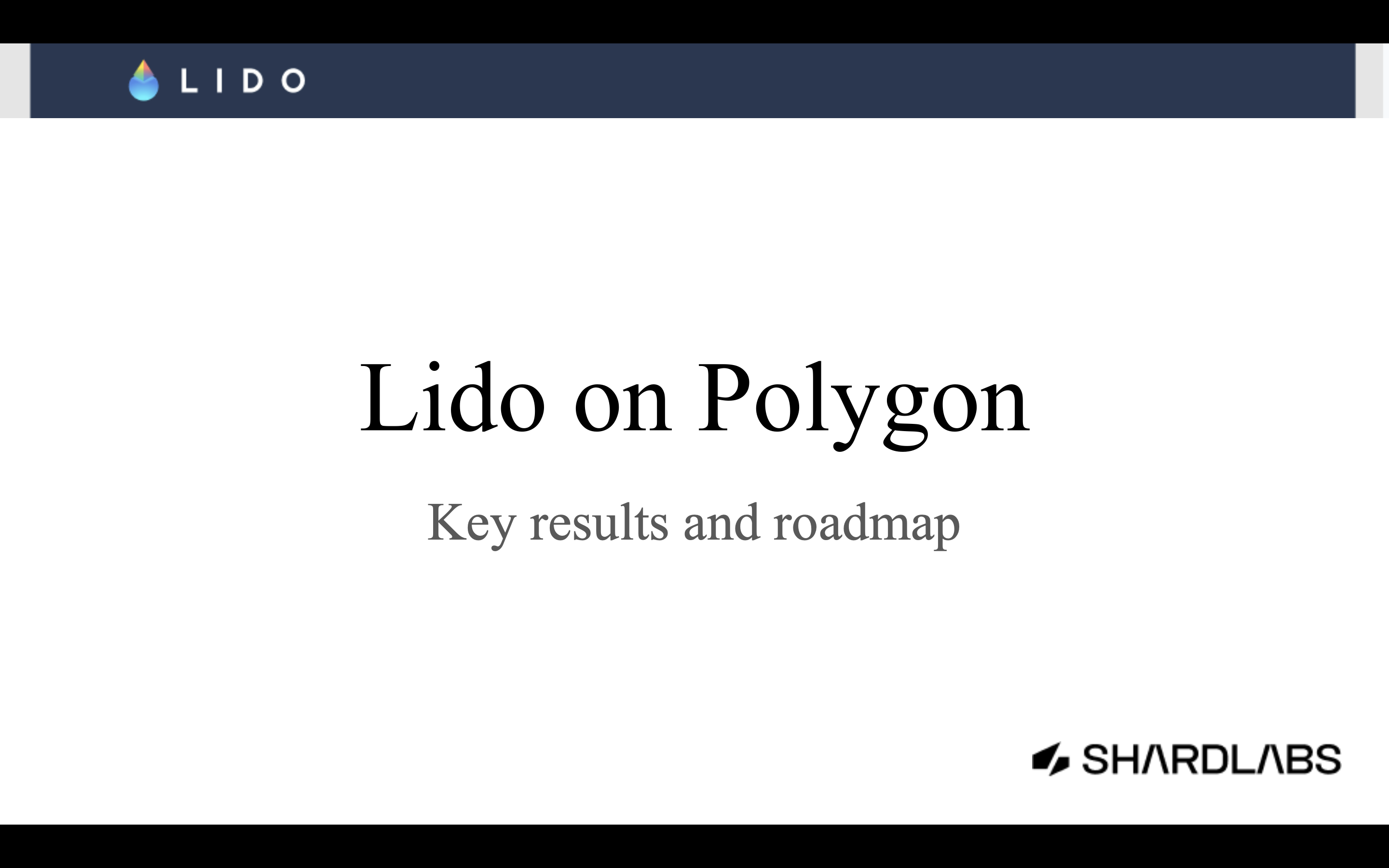 Happy to see that Lido on X teams are now in sync and pushing in the same direction. Thank you all for the hard work done to make this happen.

First of all, thank you for the great work and progress with Lido on Polygon.

I’d like to better understand your proposal. It seems you would like to amend the previously agreed on deal terms mainly based on the fact that “Polygon importance” has risen since closure of the deal.

You are also proposing to amend the vesting structure of the proposed one-off payments. Imo, for instance, the fact that you are asking for unvested tokens (700k $LDO) worth approx $840k at current prices for capturing 1-5% of market share is not reasonable. The targets should be much more aggressive. In fact, if this proposal passes, you would get an immediate payment of unvested 150,000 $LDO tokens, or $180,000 USD, which I do not find reasonable.

I would think that the incentive structure should focus on the revenue share bit to ensure long-term alignment vs short-term alignment from high one-off payments.

Think some things got a bit out of context here.

It is not created because of the Polygon importance. Even though from business perspective it is important. Housing brands like Nike, Starbucks, Meta, Robinhood and more is placing it in spotlight.
With zkEVM and Supernets it is a contender for greatness. This has nothing to do with the proposal in general.

This proposal has gone up to match a proposal before Lido on Polygon and the ones that followed. If you have a look at each one individually it will give great insight and help understanding the need for change.

Development of the LoX is not free and early steps are there to cover the costs of it and motivate high performance to capture more market share.

Happy to see people returning to the research forum after so long time. We really do need questions like this asked so community can have proper insight into happenings and reasoning to it.

Hey! Very nice proposal! Are the payouts for reaching a percentage of the market, or for holding that percentage for some period?

And one more question, does this vesting have a cliff?

I would like to add some context here as a Lido on Polygon lead from the Shard Labs angle and general information about what Lido on X brings to Lido.

Our effort started sometime in July 2021. when we started researching Polygon PoS staking as a potential candidate to build a liquid staking solution.

At the time, the only way to stake was using traditional/direct staking to validators.

Polygon was the logical next step for Lido to expand due to its popularity and size. There was no competition, and the initial proposal made more sense than it makes now in terms of incentive structure and steps for milestones to capture.

What has changed in the meantime?

I would also argue that Lido on X is an important program for the Lido ecosystem because it is not just expanding liquid staking to other networks and helping them decentralize, it is also bringing other teams to work under the Lido umbrella. It means that we are decentralizing Lido itself, removing the single point of failure, and expanding the community. Our engineers are working together, our network is growing together.

Lido on Polygon, like other Lido on X networks is helping to diversify investment risks. Lido is not putting all the eggs in the same basket, instead, Lido is standing firm on multiple ecosystems, and if one of them fails for any unexpected reason (like what happened with Terra), there are still other networks to grow and compensate.

To pull out some numbers from the report, Lido on Polygon was launched in March this year, and in the past 8 months, it managed to capture 52M of MATIC tokens staked, and 1587 unique depositors. This data is available here: Lido on Polygon: Base Analytics

Polygon’s roadmap was updated and expanded with L2s and supernets which put requirements for our team to stay aligned and work on covering the whole Polygon ecosystem to keep the status of leading liquid staking protocol for Polygon. There are no immediate actions required to do there, but we are working closely with Polygon to front run any new opportunities that arise for Lido and Lido on Polygon. It requires further research as the Polygon expansion roadmap is being built, but it will enable even better market capture for the protocol.

We are pivoting to a more capital-efficient way of bringing large stakers to Lido on Polygon, that is with a referral program as @batuX also proposed above. The referral program will not directly use funds from the Lido treasury, it will rather reward our partners for bringing more stake from the rewards themselves. This ensures business alignment between us and our whitelisted partners and long-term larger revenue for both. This model was proven to be very efficient in Lido on Ethereum.

Polygon as Lido on X network is showing strength and the strongest potential to reach the Ethereum scale of TVL in the next market cycle. Compared to most of the networks, the Polygon ecosystem is developing rapidly on multiple fronts: scaling with zk, onboarding giants from the traditional finance and entertainment world to web3 through Polygon. I am very confident that this is the way to go.

Naturally, this will bring more stake to Lido on Polygon, which in turn means more revenue for Lido in long term, return on investment, and finally profit.

The only network that launched before us except Ethereum was Terra and Solana. Lido on Solana was developed by Chorus One. After Solana, Lido on X expanded to Polygon, Polkadot, Kusama, and now Avalanche.

If you take a look at the proposed incentive structure you can see 2 major differences: a shorter vesting period for Polkadot/Kusama and an initial payout without capturing any percentage of the staked amount for the Avalanche team. Now, these are just differences in numbers which is just a part of the story. Another difference lies in the ecosystem itself. Imagine being a MATIC holder. You have tons of opportunities to make returns with MATIC. I want to say that we are not just competing with liquid staking protocols (even though they are the only direct competitor), but also all other DeFi protocols on both Ethereum and Polygon that are providing different strategies and returns for MATIC token. And MATIC is present in almost every major DeFi protocol. The real competition is great, but at the same time, it means that Polygon is already reaching significant adoption and it is here to stay.

The requirement for payouts is still to hold the target percentage for 30 days before it is considered that the milestone is captured.

This vesting does not have a cliff. The first 5 milestones are not vested and are supposed to be paid out immediately after the milestone is captured and retained for 30 days, while others (from 6% onward) have linear vesting of 1
2Y.

hi, @ShardYaco! Thank you for clarifications. 1Y or 2Y vesting? if 2Y, there’s no cliff (technically start date = cliff date), am I right?

The proposed structure along with vesting durations is inside the table in the first post under “Vesting Terms” row.
The proposed duration for vesting is 2Y, there is no cliff.